No Truth Shall Go Unpunished, Especially If It Sets You Free 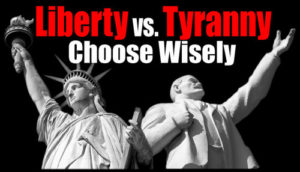 The Tyrants of the lamestream media, congress, the deep state and the cabal are in a full blown meltdown for President Trump daring to speak the truth. As I said in an earlier video it has gone far beyond Right versus Left and Democrat versus Republican. Our Liberty Revolution is now Tyranny versus Liberty.

The Charlottesville Charade, yes it a charade for it was 100% a staged event. The FBI once again stages it under their cointel program where they send in agent provocateurs into specific groups they choose to discredit. In Charlottesville they infiltrated the ‘Unite the Right’ protest because a united right will defeat the tyranny of the leftist globalism treason.

It will put an immediate end to their violent coup d’état and organize opposition to their plans to overthrow America. A military coup is very possible in the near future will little fear of a counter-coup due to the Obama purge in 2013. Obama unceremoniously removed over 200 loyal generals to a sovereign United States which poses a huge threat to the globalist transformation of America.

What outrage on these tyrants. They deceitfully engaged in a false Russia Delusion of Collusion narrative for nearly a year and suddenly drop the story after it is proven as fake. This will not stand if they simply believe that’s the end of the story as they move on to another delusuion of unsubstantiated racism. ALL who were involved in this coup d’état must answer for their evil and treasonous deeds whether from the cabal, democrats, RINO republicans, generals, special counselor and especially the media. These crimes will not go unpunished!

What we see happening now was planned for a very long time. Donald Trump and America threw a huge monkey wrench into their machine by defeating Queen Hillary in the 2016 presidential election. They were reeling after the election and desperate to deny Donald Trump the presidency … they FAILED.

The left does not handle defeat at all for they are a delusional bunch of people that manufacture their own reality. They have the lamestream fake news propaganda media to prop up and spin their alternate reality to make them feel good about their chronic dysfunction. Perhaps we should start calling them alt-reality.

They are now into a full-blown violent coup d’état that is escalating into a potential Civil War as cover for the violent coup. The alt-reality mob is hell bent upon starting WW3 with Russia for they pose a huge threat not to America but to globalism, what American government has embraced.

Russia is staunch nationalism and reject globalism outright and Islam terrorism their tool to destroy Western Civilization through the destruction of national patriotism, borders, religion, culture, language and laws to soften the beach for globalism. The elements for possible resistance must be demonized and then destroyed before the transformation can be completed. That’s what Charlottesville was about.

There will be more but the leadership is smarter the alt-reality mob. Racial violence leading to Civil War is desirable to impose draconian laws to eliminate our liberties guaranteed under the Bill of Rights. A strategic stand-down is essential to disarm the alt-reality from imposing such draconian law. It’s a brilliant move and all stand-down on protests from the liberty movement thwarts their plans.

Should antifa, bamn, blm and other far-left violent groups funded by George Soros start to kick-up rioting in the streets and causing substantial property damage let it happen. They will only go to alt-reality cities to cause their damage for they have a cooperative leftist government at the local and state levels, like they did in Charlottesville, Portland and Berkeley.

There should be an executive order or some other mechanism enacted that says any states and cities that do not take strong and definitive action to preserve property destruction will not be able to appeal to the federal government for financial relief. Congress is led in the House and Senate by alt-reality Ryan and McConnell and cannot look to them for legislative assistance.

The far-left tyrants of the democrat party seek to Censure President Trump for speaking the truth. Imagine that! How dare he say the violent alt-reality thugs are violent thugs? That puts the dysfunctional tyrants into a conniption fit for Trump is not going defensive or cowering and seeking forgiveness and saying he’ll never do it again.

Should we allow the alt-reality mob continue to desecrate confederate monuments? Absolutely not! Because American history is national, perhaps we can muster a federal law enforcement operation to protect, defend and prosecute all monuments by making it a federal crime.

If the alt-reality mob is serious about racist monuments perhaps they should consider these democrats who are pillars of racism: Democrat Presidents Andrew Johnson, Woodrow Wilson, Franklin Delano Roosevelt, Lyndon Baines Johnson, and Sen. Robert C Byrd who are all documented racist, not the invented kind of the alt-reality mob.

The alt-reality gang is in desperate need of adult supervision and President Trump is one of the few adults in national leadership we can lean on. Have you had enough of the alt-reality mob yet? Let you voice be hear before it is silenced.

Article: Twelve Memorials that Must Be Removed if Democrats Are Serious About Erasing Racis Democrats

On August 16, 2017 the Tyrant monopoly of Google/YouTube banned NewsHawk Network from postinf videos to our channel. This is what this nation is becoming under the tyrannical left.