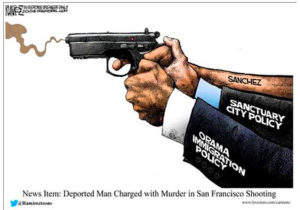 Federal law prohibits anyone including municipal, local, county and state jurisdictions from bringing in and/or harboring illegal aliens under 8 USC §1324. Many of these immigration laws were on the book since 1952 and the code in its entirety is provided below under references. Penalties upon conviction include criminal fines, imprisonment, and forfeiture of vehicles and real property used to commit the crime.

Those proclaiming that sanctuary cities do not violate any laws are delusional democrats, establishment republicans and globalists. The law is clear as are the definitions and the penalties for violations.

The case for sanctuary cities and in regard to California a sanctuary state as of February3, 2017 is wholly without merit. There is no legal recourse to dance around the illegality of sanctuary cities other than the desire to violate and not enforce federal law.

Activist Judges countermanding President Trump’s Executive Order and existing federal laws, like the 2015 Texas case where the Federal District Judge in San Antonio said Texas cannot outlaw harboring illegal aliens. The Texas law focuses on the harboring of illegal aliens and granted the state powers to seize property because the Obama un-justice department refused to do it job of enforcing federal law. 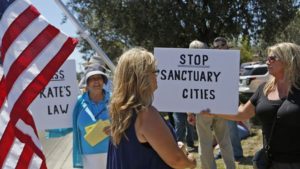 The judicial system is but one place where this war is being waged. Another is from patriot citizens protesting and challenging legislative councils seeking to violate federal law by enacting laws that defy implementation and cooperation on reporting criminal illegal aliens to ICE: Immigration Criminal Enforcement agents. Open borders and aggressive hostile acts to destroy that which exist are necessary to usher in the age of globalist totalitarianism, often referred to as NWO: New World Order.

A globalist strategy is to demonize nationalists like Trump and 75% of all Americans with the litany of abusive names. They need no justification for the name calling for any threat to NWO is often labeled as conspiracy theory. It’s no theory but it is conspiracy! 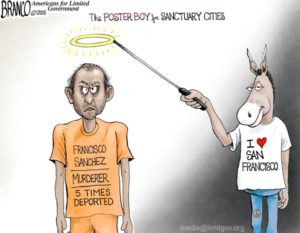 When political parties, US Congress, the judiciary and most past presidents with the exception of Presidents Reagan and Trump pretend that globalism is the law of the land and all who oppose it anti-American with the propaganda media reinforcing such then we know that all Americans have a duty to stand in defiance of globalism. WHEN INJUSTICE BECOMES LAW … RESISTANCE BECOMES DUTY!

There are groups and organizations designed to assist locals with education and resources to challenge and defeat any legislative body from enacting law that violate federal law. Let’s take a look at some successful operation in achieving just that in places like Realto, CA and others.

Video: Confronting Those Who Seek to Take Over The Country

Exposing the illegal actions regarding Sanctuary Cities is often sufficient to derail the efforts.

Tags:
aliensdefiancedutyillegalinjusticelawsanctuary
« Buh Bye Mozilla, Hello Vivaldi
When Draining The Swamp, Did You Think The Creatures Would Not Object? »
Share