“We have opened an investigation, and we are taking steps to ensure that it has no effect on the election tomorrow. I am confident that the results will not be compromised.” – Brian Kemp, Secretary of State, Georgia.

He said the same thing in 2015 election fraud scandal concerning a memory stick issue. It seems Kemp is a standard apologist to cover-up massive fraud. A majority of the election machines were purchased in 2002 or earlier according to WABE. We now see how and why there is massive voter fraud across America. Election officials regardless of party refuse to acknowledge there is massive fraud happening in every election and in most every district. All these ‘probes and investigations’ are not correcting the problem.

Last week there was a special election in the Kansas 4th District for the seat vacated by Mike Pompeo to take the position of CIA Director in the Trump Administration. In that election the Democrats spent $Millions but lost to Ron Estes, R who won by a 7 point margin.

A close race if you consider that Mike Pompeo won his last election by a margin of 20 points when he took 60% of the votes. Are we expected to ‘buy’ this shady result?

Well, democrat spending could not buy the seat in KS so perhaps they’re returning to their old reliable standby for Georgia … FRAUD! The democrats are in disarray; their party is imploding; they have lost over 1,000 seats nationwide over the last 8 years; people are leaving the democrat party in droves and they are desperate to retain their standing as a national party.

But somehow they expect us to believe they are ‘oh so close’ to knocking off republicans in their stronghold districts? They lost by only 7 points in the special election in Kansas and in a highly conservative district and nobody bats an eyelash. The Georgia special election is for the seat vacated by Tom Price to become Secretary of Health and Human Services. Democrats are desperate and voter machine theft goes unreported and we hear the same BS every election. This is extremely disconcerting.

Janine Evler, Cobb County Election Director insists, “the information on the machines is ‘hard to access’ and does not think the thieves will be able to interfere in the election.” Really? Not according to most who are familiar with electronic voting machines. 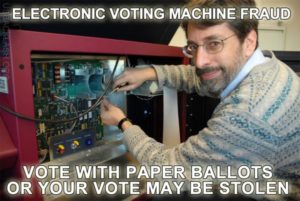 States must not give up their voting control over elections as Obama tried to usurp before leaving office. Only public pressure to enact the required changes must will restore trust in a corrupt system. Manufacturers must have a reliable VVPAT for all electronic voting machines and the states must retain these records for challenges and audits. Deny all you want but election and voter fraud is rampant.

Just how stupid does Janine Evler and Brian Kemp think the electorate is by proclaiming in advance before having any facts that everything is fine? Everything is not fine and the Georgia 6th District election is compromised. Let’s see if there is another tight race tomorrow in this heavily conservative district. I do not accept the closeness in KS and certainly will not accept one in Georgia when this state has one of the worst reputations in America.

Fraud is taking place all across America and I fear nothing will be done about it. It matters not if the republican wins in a heavily conservative district for when the outcome matches that which is predictable, it always gets swept under the rug. I say no more.

We will never rid ourselves of election and voter fraud as long as we keep ignoring the fraud. Crimes are being committed and justice must be served. This major problem can be easily addressed if the will to do so was present. Unfortunately the will is not present. It’s up to us to change that and before the 2018 mid-term election.

Article: Most Georgians Using Voting Machines Bought In 2002 Or Earlier

Article: Tampering With US Voting Machine As Easy As ‘abcde’says Virginia Report

NOTE: There are literally thousands of reports that can be used to reference massive election tampering and fraud in every state throughout the United States. Rare and uncommon are term that cannot be used in describing the seriousness and pervasiveness of this problem.

UPDATE: On April 19, 2017 GA District 6 results are in. The democrat Jon Ossoff, who is not a resident of his district obtained 48% of the vote forcing a June 20 runoff election. Ossoff will run against republican winner Karen Handel who received 20% of the vote. There were 5 democrats, 2 independents and 11 republicans on the ballot. Not for nothing but what the heck are the republicans thinking in running 11 candidates? Even so, are we really expected to believe a failed democrat party has this sort of clout in a conservative republican stronghold? Go ahead, I dare you to say there is no fraud.

Tags:
electionfraudGeorgiamachinespecialtamperingtheftvoting
« Shame on You Google!
US Trying to Instigate War with Russia? »
Share