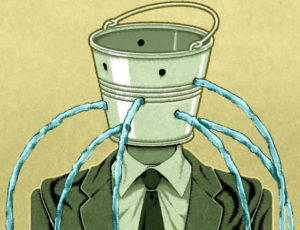 The White House is rightfully tightening ship to mount an assault on Deep State leakers. It should now be clear that Reince Priebus and Sean Spicer teams may be the source for the leaks coming from the White House. I’m still scratching my head regarding their appointments.

The reason there were no leaks concerning the long overdue Comey termination is that these two were kept in the dark. While this is not definitive proof of leaks, a strong in absentia circumstantial case can be made.

Regarding the FBI leaks and cover-ups it is not beyond the pale to look directly at James Comey and his Lieutenants especially now Acting Director Andrew McCabe. McCabe’s meteoric rise through the ranks since the Clinton-McAuliffe-McCabe scandal is for the record books and smacks of fraud and bribery. 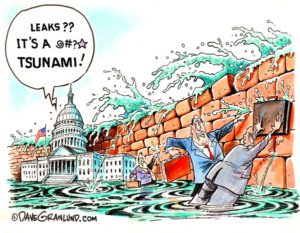 earth’ policy to remove President Trump. You will be seeing many fake news reports based on leaks for the media to spin that President Donald Trump is not mentally competent to handle the stress of the Presidency and therefore must be removed.

This scheme is a thinly veiled coup d’état being coordinated with congressional democrats and RINO GOPe republicans like John McCain, Lindsey Graham and others who are joining with democrats to present a constitutional argument for an Article II, Section 1, paragraph 6 and Section 4 Impeachment proceeding. Many fake news media reports are uniformly trying to present the case for mental incompetency. Their folly is utterly absurd.

Comey was a critical piece to keep the ‘illusion of collusion’ alive that President Trump is under an FBI investigation for colluding with Russia to win the 2016 Presidential election. Andrew McCabe has been fast-tracked to the position of acting director by the Clinton-Obama operatives to ‘take care of’ the investigations.

McCabe is a crony and currently under review by Michael E. Horowitz, DOJ Inspector General for his role in the Clinton-McAuliffe-McCabe scandal. Andrew McCabe cannot be trusted and must be considered as serious termination candidate.

He is in a key position and under substantial pressure to continue to keep the lid on any Clinton, Obama, Spygate and pedogate investigations from moving forward for any of these can unravel their web of crime and corruption. We’ll soon see if McCabe will keep the Russian ‘illusion of collusion’ alive like Comey did. The leaks flooding the lamestream fake news media is being spun to create significant damage to justify removal of President Trump.

Joe DiGenova has revealed FBI agents were targeting top officials in the Obama DOJ for ‘something they are going to regret’ for quite some time. They were gunning for AG Loretta Lynch, Deputy AG Sally Yates, Assistant AGs Peter Kaznick, John P. Carlin, and Leslie Caldwell. AG Eric Holder is not guiltless either. This too has stalled under the Comey-McCabe scandals.

Sally Yates was an Obama holdover and properly terminated by President Trump for what is treasonous activity. The remaining Assistant AGs have resigned. Nonetheless, any criminal activity engaged in by them cannot and must not go unpunished. Right now all these investigations are being suppressed to go after President Trump.

We cannot wait for a permanent FBI Director before removing Andrew McCabe for the leaks have been restored to earlier levels now that Comey, a major operative and swamp creature has been terminated. With McCabe at the helm we will never get the illegalities like leaking classified information, illegal spying, unmasking and distribution across IC units for leaking, and Obama treason.

Neither will we be able to honestly look into what triggered the outrage and insurrection of the FBI agents to go after the Obama regime DOJ. McCabe cannot be trusted to stay in his position one more day. He can immediately do great harm to this nation.

David Laufman, Chief of Counterintelligence for the DOJ and Obama holdover has all classified information regarding espionage pass by his desk. Mike Cernovich is reporting that Laufman is the source of leaks and despite fake news and deep state denials; Cernovich is a reliable source of information and believable. A campaign to discredit him is underway.

Obama has politicized and weaponized most departments and agencies like the IRS, EPA, BLM, DOJ, CIA, NSA and FBI to ‘go after’ political opponents, US companies and citizens. These weaponized operatives still remain as holdovers and actively engaged in their politicized criminal activities. 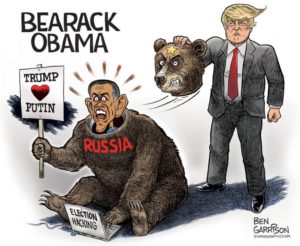 Obama Behind the Russian Hacks

The NSC will initiate major conflicts across the globe by involving CIA and other foreign intelligence units to orchestrate events to justify war similar to what they did earlier this year and in 2013 regarding Syria false flags. Therefore two critical removals must be National Security Advisor HR McMaster and Chair of the Joint Chiefs Joe Dunford.

Removing these two from their current office will effectively derail plans for WW3 with Russia for Syria is their ticket to global war. North Korea will not accomplish this objective. The infestation of criminals and traitors in our government is mind numbingly staggering. Globalists do not see treason for their objective is the destruction of nationalism and everything associated with it.

David Laufman should be the next person to be terminated immediately. We need to stop the floodgates of the classified information being poured out to the corporate fake news media.

H.R. McMaster must be terminated immediately for insubordination in usurping decisions only the President can make. McMaster’s goal is to utterly corrupt the NSC with globalists and initiate military action against Syria and Russia to start WW3.

Reince Priebus must also be terminated for it has been discovered that he and his team are responsible for many of the White House leaks. Same is true for Sean Spicer.

Andrew McCabe should be immediately removed as FBI acting Director and depending upon the result of the IG investigation terminated.

Joseph Dunford is an Obama holdover committed to the globalist agenda of WW3. The Chair of the Joint Chiefs is arguably just as powerful as the Presidency. In fact a revamping of all the joint chiefs is indicated. Obama forced out of government most generals not committed to the globalist agenda. Perhaps a reinstatement is indicated for the pool is not as deep as it should be.

Article: Trump’s Comey Firing Sets Off New Round of Leaks

NHN Article: Andrew McCabe as FBI Acting Director is Like A Drug Addict Running A Pharmacy

Article: Will DOJ leaker David Laufman be next to leave after #Comey?

NHN Article: Globalists Coopt Trump; Not What America Voted For